Paint Your Own Pictures

I am a pretty big fan of poems that allow the reader to make their own choices about how they should be read. So, that is what I’ve gone for here. Hence the title … do your own damn thing.

The full text of this poem reads: “Sing a song in 1989. I sing in June.”
This would be the most direct reading of this poem.
For the less obvious read, follow me. 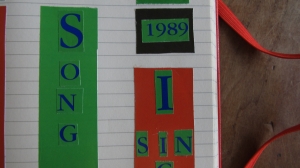 I sin gin in June

And I can’t use these words—June, gin, sing, sin—without thanking Gwendolyn Brooks.

Anyhow, I am breaking this poem apart just to show you the prompt.

This poem was created using only the letters from one particular magazine page.
… I believe it was originally a notice about a gallery show …
So, I clipped most of it into letters and arranged them however I wanted.

Word Your Own Poem Prompt: Take it down to the letter-level.

Find a page in a magazine with a DISTINCTIVE font/color (an advertisement will probably work best). Clip up the letters however you want. You may or may not choose to leave some words whole.

Arrange the letters on your page in a way that:

Naturally, your finished poem will be small.
Another thing I find irresistible. Small Poems.

A Gallery of Controversys, Another affair with Water